Back from the brink : Predator Free 2050 Limited

The Hunua Ranges contain the largest tract of regenerating and mature native forest in the Auckland region.

The view from a wooden platform on the summit of Mount Kohukohunui is stunning: over the Firth of Thames, the sanctuary islands of the Hauraki Gulf, across to the Manukau and down to the lakes of the Waikato.

But, in the early 1990s the emergent crowns of rata trees surrounding it were dead, eaten by possums, and the resident population of kōkako, ravaged by rats and stoats, was down to its last breeding pair.

In a first for local government, the Auckland Regional Council voted to ‘actively protect the kōkako’ and began protecting native biodiversity, previously considered the domain of the Department of Conservation.

Fast forward 25 years, there are now 116 breeding pairs of kōkako in the ranges. We encounter one walking across branches above us within 10 minutes of leaving the road and the next morning, from outside the hut, we listen to the liquid calls of half a dozen birds.

We see and hear ruru, kākā, tomtits and bellbirds on our walk to the trig. Hochstetter frogs and long-tailed bats (pekapeka) are also present.

Brown kiwi were on the list until recently but were “taken off the hill” after translocated birds started to fall prey to a ferret. 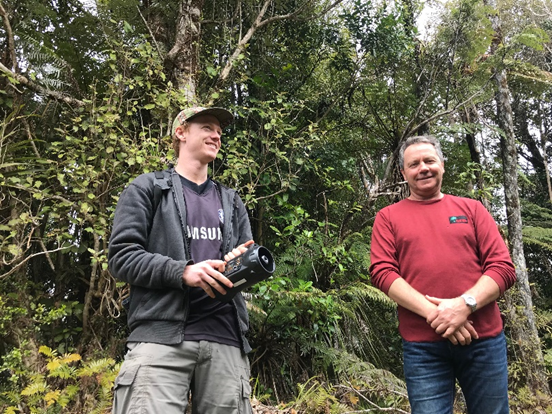 The programme is delivered by several contractors and a dedicated team of volunteers, some now well into their sixties, seventies and even eighties.

Their coffee mugs hang under name tags inside the Café, one of two four-berth huts, tucked discretely on a side ridge off the main track. The Auckland Council-coordinated team maintains a network of over 200 traps (mainly DOC 200s in wooden boxes baited with eggs and mayonnaise, some Fenns for ferrets and Timms for possums and feral cats), 2800 bait stations (with bags of Pindone) and tracking tunnels across 140 km of marked trails.

A heat map of captures and bait take shows the constant pressure of reincursion from the edges of the project area. A plot of tracking tunnel indexes over time shows the effectiveness of aerial 1080 applications, most recently in 2015 and 2018.

Su hopes that some of the new technologies being supported and explored by Predator Free 2050 Limited – a rat-specific toxin, self-resetting and reporting traps, thermal cameras and foliage penetrating radar – will prove to be other game changers, enabling places like the great forest of Kohukohunui to become permanently free of predators.